In the mountains of Bavaria a woman lies in a bed, a prisoner in a Nazi concentration camp.  She and her roommate are kept by a surly nurse, who seems less concerned with their actual health, and more with their ability to walk come Saturday.  When the roommate begins to hack and cough, the nurse calls for the doctor.  Doctor Ditten (Phillip Dorn) enters and sends the roommate out for treatment.  He now turns to the other woman, a German-born actress named Emmy Ritter (Nazimova).  Ditten recognizes her from her days on the stage, and it is implied that he has gone above and beyond in her treatments in an effort to keep her alive.  This seems to be a cruel irony because Emmy has been sentenced to death and her execution is to take place on Saturday.  Ditten takes pity on the poor woman and offers to let her write a letter to her son, however he will not be able to deliver the letter until after the execution.  Convicted as a traitor for harboring refugees, Emmy is surprised at this offer of kindness and gladly accepts.

Unbeknownst to both of them, Emmy’s son Mark Preysing (Robert Taylor) has arrived in the country looking for any information on his mother’s whereabouts.  He is stymied however, when everyone he talks to gives him the same response.  No one will talk about what has happened to his mother and instead recommend that he go back to America as quickly as possible.  Mark is relentless and goes the police commissioner to find out what he can about his mother.  It is here that he finally learns what charges have been brought against his mother and he pleads with the commissioner to see sense.  His mother is a kind woman who has no traitorous inclinations at all, she must have been confused and certainly didn’t mean anything treasonous!  The commissioner won’t listen and is only interested in learning who told Mark that his mother was being held at all.  Mark won’t reveal his source and is told to return next Friday.

Mark now travels to a small Bavarian town in search of an old servant of his mother’s, a man named Fritz Keller (Felix Bressart).  When he finally finds him however, Fritz claims not to know him and brushes him aside.  Dejected, Mark wanders down to a frozen lake where several young women are skating.  They call to a nearby woman who they call “Countess”.  The Countess Ruby (Norma Shearer) soon falls into conversation with Mark and reveals that she is also American.  Having moved to the country over ten years ago, she stayed on after her husband died and now runs a finishing school out of her home.  Ruby is sympathetic to Mark’s situation but has no information to give him, though she promises to get in touch with him if she finds anything out. 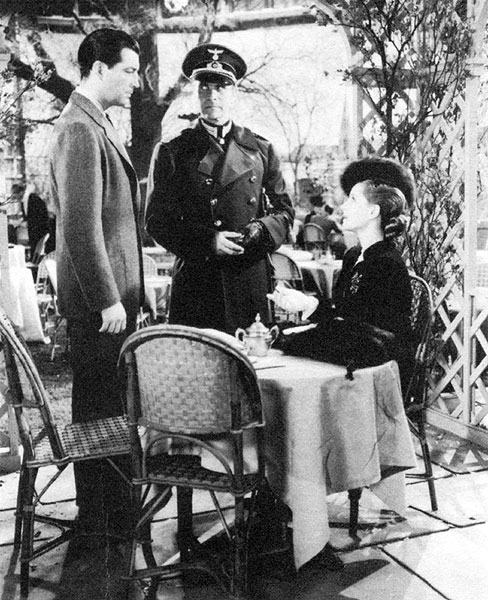 Ruby has indiscretions of her own and is the mistress of a high-powered Nazi general, Kurt Von Kolb (Conrad Veidt).  Kurt and Ruby have known each other for many years and became involved soon after Ruby’s husband died.  Kurt suffers from a heart condition and so must avoid excitement.  So when Ruby broaches the topic of Emmy Ritter, she does so subtly.  Kurt reveals that Emmy is being held in a camp not far from the village and will be executed on Saturday.  The next day Ruby heads into town with her girls to see a military parade.  Feigning a headache, she slips off into Mark’s hotel.  Once there, however, she loses her nerve and cannot bring herself to tell him what she has found.  Mark, for his part, has begun to fall in love with Ruby but once he finds out that she is involved with Kurt he pulls away.  Later that night, Kurt mentions to Ruby that she was seen talking with Mark.  He warns that if Mark continues poking around there will be consequences, regardless of whether he is an American or not.

Ruby asks Mark to meet her that night at a concert and he reluctantly agrees.  Once there, Ruby warns him that he must leave Bavaria as soon as possible.  Mark is enraged at what he takes as callousness on her part and lashes out at her.  At this point the concert lets out and the pair find themselves in the lobby surrounded by people.  Ruby sees several people she knows, including Doctor Ditten.  She soon leaves with a group of friends, leaving Mark and Ditten to share an umbrella.  The two men decide to go and get a drink at a local pub.  It is here that Ditten reveals his party affiliations, and asks Mark to send him some American medical journals.  Mark agrees and the two men exchange addresses, and names.  Ditten is shocked to learn that he is drinking with the son of Emmy Ritter and produces the letter written for him.  He finally tells Mark the truth of his mother’s situation and that there is nothing to be done.  He also advises Mark to leave, something he refuses to do.  Ditten leaves but invites Mark to his apartment the following evening.  Mark returns to his hotel and finds Fritz waiting for him.  He admits that he was afraid to be seen talking to Mark but offers to help bury Emmy properly after the execution.

The next day, Emmy suffers what appears to be a fatal heart attack.  Ditten pronounces her dead and signs her certificate.  That night Mark comes to Ditten’s apartment where, after dismissing his maid for the evening, Ditten reveals that Emmy is not truly dead.  She is in a coma after being administered a drug by Ditten.  Mark must now find a way to go and retrieve her body within the next three hours or Emmy will suffocate in the coffin.  He must also bring with him many blankets and coats to help warm her up.  Mark is at a loss but soon decides to call Fritz, telling him to that Emmy has died.  Fritz is instructed to collect Emmy and then meet Mark at a local pub.  However, when Mark arrives at the pub he finds that two Nazi officers are also stopping there and they have developed an interest in this American with his large bundle of blankets and coats.

I will admit that when I first started watching this film I found Robert Taylor’s character sort of annoying.  ESCAPE is based on a book and I am not sure how close to the source material the screenplay is, so I can’t say if this is how he is in the book.  The character of Mark comes off as a “typical American”, running around Bavaria demanding to know where his mother is.  He is confounded by the reluctance of the townspeople to help and their insistence that he return to America.  I found this a little irritating but then I was coming at it with the benefit of history on my side.  The important thing to realize is that the time when this book was written and when this film was made was a very crucial moment in history.  Hitler had been in power for almost seven years, World War II was happening but America was not yet involved, the full and terrible truth of the Nazi regime was not yet fully realized.  So if you look at it like that, the reaction of Mark to the people of Bavaria makes more sense.  He is the typical American in that he cannot conceive of a life where you are not free to question, to challenge, to investigate.  The very idea that there might be a place where people can be arrested and sentenced to die simply for helping those who wish to leave the country is so completely alien and foreign to him that he simply cannot accept or process it.

Ruby is a much more complex character, an American who has chosen to give up her citizenship in order to remain in a country that is not her own.  This country is now swept up on the Nazi tidal wave and yet she remains.  Not only that, but she has a lover who is a high-ranking Nazi official.  She seems to still believe that just because Kurt wears the uniform he remains pure of heart, rejecting the Nazi rhetoric.  That her adopted country, though now controlled by the Nazis, is not changed by the events surrounding it and remains the same place she fell in love with.  As time passes she begins to see that the Nazi poison has in fact taken hold of all that she once held dear, including Kurt.  She must then decide where her loyalties lie, whether it is with her adopted country and German lover or with her birthplace and Mark.

Kurt is a devious man.  I think that the fact that his heart is damaged (irony intended) has caused him to be far more underhanded than perhaps he once was.  Some of the comments he makes to Ruby, glancing blows at first and far more savage digs later, seem almost diabolical.  It is his way of keeping her off guard, keeping himself in control of the relationship.  Further, he is a complete convert to the Nazi ideology whatever Ruby might hope for.  By the end he has shown himself to be an enemy in every sense of the word.

As I noted before, this film was made at a strange moment in history.  People were aware that bad things were happening, that Hitler was trouble, and yet there was still this moment of peace when all the world was at war except America.  And so, this movie does not wish to disturb that peace.  For the entirety of the film no mention is ever made of Germany or Nazis.  It is rather “that country” and “political police”.  Even Hitler avoids much mention beyond a Nazi salute.  While the message is clear, that this is a dangerous regime and the world should be on watch for it, the political constraints of the time prevent it from being made obvious.  All in all ESCAPE is a good film and compelling story, one that is almost made more powerful for all the things that it doesn’t say as well as what it does.