This post is part of the Classic Movie History Project Blogathon hosted by Fritzi of Movies Silently, Ruth of Silver Screenings, and Aurora of Once Upon A Screen. Be sure to check out all the other entries here! Also take a moment to stop by Flicker Alley who is sponsoring the blogathon to celebrate their newest release!

When you hear someone called “the most important female director the American film industry has known”, “… American cinema’s first genuine auteur, a filmmaker involved in all aspects of production and one who utilized the motion picture to put across her own ideas and philosophies…”, and “one of the most important and prolific film directors in the era of silent films”, you would probably think that this is someone you should know something about.  So if I told you that the name of the person being talked about in the quotes about is Lois Weber would you know who I was talking about?

Born Florence Lois Weber on June 13, 1879 to Mary Snaman and George Weber of Allegheny, Pennsylvania she was considered a wonderful pianist and a bit of a child prodigy.  Music was her passion growing up, the middle child of three in a devout Christian family.  As a teenager Lois left home and lived on the streets in poverty while working as a street corner evangelist and social activist for two years until her evangelical group disbanded in 1900.  She moved back in with her family and continued her musical education.  In 1903 she began touring the country as a soprano and a pianist.  During one concert recital one of her piano keys broke causing her to give up her musical career and retire from the concert stage.

Lois became frustrated by her lackluster conversions as a missionary and taking some advice from an uncle, traveled to New York City in 1904 in order to pursue acting.  As she explains it, “As I was convinced the theatrical profession needed a missionary, he suggested that the best way to reach them was to become one of them so I went on the stage filled with a great desire to convert my fellowman”.  For the next five years, Lois worked as a stock actress and repertory, and in 1904 she joined the road company “Why Girls Leave Home” and became a musical comedy prima donna and melodrama heroine.  She also met her future husband, Wendell Phillips Smalley, among the members of the troupe and the two were married shortly before her 25th birthday one April 29, 1904.  After her marriage Lois left her theater career in 1906 and became a homemaker while working freelance to write movie scenarios. 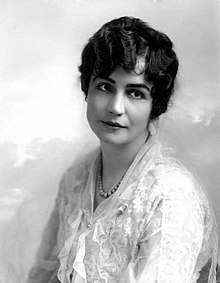 In 1908 Lois was hired as a singer for chronophone recordings by American Gaumont Chronophones.  After the conclusion of the 1908 theater season she was joined by her husband at the Gaumont studio in Flushing, New York.  It was at the Gaunt studio that Lois Weber met Alice Guy, who is credited not only as the first female director but also Lois Weber’s mentor.  Alice Guy showed Lois the behind the camera aspects of moviemaking, leading Lois to expand her skills into the realms of producing, directing, and writing.  She was soon writing scripts and then began directing English language phonoscènes.  Husband and wife decided in 1910 to attempt to make a living in the new motion picture industry.  Over the next five years they worked as The Smalleys, although Lois generally was given sole writing credit, for numerous companies such as Gaumont, Reliance Studio, Bosworth, the New York Motion Picture Co., and the Rex Motion Picture Co.

In 1911 Lois directed and acted in THE HEROINE OF ’76, her first silent feature film, though she shared directing duties with Edwin S. Porter and her husband.  At the time of the 1912 merger by Rex with Universal, Lois and her husband were known as “prima facie heads of Rex”.  In fact they ran Rex Motion Picture Co. as a subsidiary of Universal and turned out a two-reel film every week, until they left the company in September of 1912.  Founder of Universal, Carl Laemmie, was a great advocate for the use of women directors and producers including Lois Weber.  Universal City was created in 1913 and shortly thereafter Lois Weber was elected its mayor, causing the Universal publicity department to claim it was the only municipality in the world to be run by women officials.  While at Universal, Lois would have a hand in all aspects of filmmaking.  She not only wrote, directed, and acted in her films but gathered props, edited film, and designed sets as well.

Lois would star in the first English version of THE PICTURE OF DORIAN GRAY in 1913, which was produced for the New York Picture Co. and directed by her husband.  The two would then collaborate on making a ten minute thriller entitled SUSPENSE, based on Au Telephone by André de Lorde.  As Lois adapted the play, the film tells the story of a woman (played by Lois Weber) who is being terrorized by a burglar and required several mirror shots and multiple images to tell the story.  It is thanks to this film that Lois Weber is credited with championing the use of the split screen effect in order to show simultaneous action, though this technique had been used in several Danish films prior to 1913.  Lois and her husband followed up SUSPENSE with the film THE JEW’S CHRISTMAS.  This movie, which dramatizes the conflict between traditional Jewish values and modern American customs, is noted for being the first portrayal of a Jewish rabbi in an American film.  It also showed interfaith marriage, cultural assimilation, and the disconnect between the first generation and their children.  Considered controversial at its release because of its approval of interfaith marriage, THE JEW’S CHRISTMAS strove to fight anti-semitism and racial discrimination.

Lois and her husband would soon relocate to Los Angeles which would have a huge impact on their careers.  1914 was coming and with it was a film called THE MERCHANT OF VENICE.  This film would become important because it would be the very first feature length film to be directed by woman.  Any guesses who that would be?

Some great articles about the life of Lois Weber can be found here, here, and here.