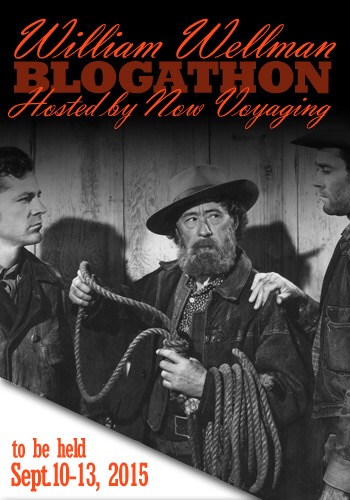 We have had a great turn out so far but in case you haven’t signed up yet the announcement post along with the updated roster can be found here.  There are still plenty of films yet to be claimed (although duplicate topics are okay too), especially among Wellman’s silent and pre-code films.  Here are the unclaimed titles so far:

Lafayette Escadrille
Darby’s Rangers
The High and the Mighty
My Man and I
It’s a Big Country: An American Anthology
Across the Wide Missouri
The Next Voice You Hear…
Gallant Journey
This Man’s Navy
Buffalo Bill
Reaching for the Sun
The Light That Failed
Men with Wings
Small Town Girl
Robin Hood of El Dorado
The President Vanishes
Stingaree
Looking for Trouble
The Conquerors
The Hatchet Man
The Star Witness
Maybe It’s Love
Young Eagles
Dangerous Paradise
Woman Trap
The Man I Love
Chinatown Nights
Ladies of the Mob
The Legion of the Condemned
The Cat’s Pajamas
You Never Know Women
When Husbands Flirt
The Circus Cowboy
The Vagabond Trail
Not a Drum Was Heard
Cupid’s Fireman
Big Dan
Second Hand Love
The Man Who Won

18 thoughts on “Update on The William Wellman Blogathon!”