The story of DR. JEKYLL AND MR. HYDE is not a new one to movie-goers.  Among classic film fans there are at least four different versions to choose from.  Frederic March is notable for his pre-code take on the tale while Spencer Tracy starred with a young Ingrid Bergman in the post-code one.  In 1920 two silent versions of the film were made but this version, starring John Barrymore in the role that would push him over into star status, is thought to be the superior of the two.

Dr. Henry Jekyll (John Barrymore) is a young and successful London physician.  He spends most of his time treating the poor of London in his free clinic, while the rest of his day is spent in his laboratory experimenting much to the chagrin of his more conservative friend, Dr. Lanyon (Charles Lane).  He is also a bit of a goody-two shoes, at least according to some of the older physicians.  The lead tempter is Sir George Carew (Brandon Hurst), who also happens to be the father of Jekyll’s sweetheart, Millicent (Martha Mansfield).  One evening over dinner, Sir George expresses his dismay over Jekyll’s purity.  “No man can be so good!” he proclaims but his cronies and Dr. Lanyon assure him that with Jekyll what you see is what you get.

Jekyll enters the dinner at this point, after taking a moment to tenderly greet Millicent, and is met with derision from Sir George.  “You are so good and perfect but aren’t you neglecting your other needs?” he asks.  Jekyll is shocked at this speech and what it implies but like a bachelor party gone wrong the men drag Jekyll off to a dance hall to help him “experience” the parts of life they believe he is missing.  Once there the men are treated to the sight of exotic Italian dancer, Gina (Nita Naldi).  Sir George invites Gina over to their little group for some “quality time” with Jekyll who is initially drawn to Gina but remembers himself just in time.

Some days later Jekyll is still conflicted over the events of the dinner party and wonders aloud to Dr. Lanyon if it wouldn’t be possible for science to devise a way to separate the baser instincts of men from their more noble souls, thus leaving their immortal souls untouched while allowing temptation to have its way with their desires.  Dr. Lanyon is, of course, horrified at this notion and advises Jekyll to forget the idea ever occurred to him.  But of course Jekyll can’t and it isn’t long before he has come up with a potion that will do exactly what he desired.  Jekyll takes the potion one night and is immediately transformed into Mr. Hyde, a man with no soul and unbridled desire.  At this early stage however, Jekyll still has enough control over Mr. Hyde to immediately return to his laboratory and take the serum that will return him to his normal state.  He then tells his servant that his friend, Mr. Hyde will be coming to visit and is to be allowed free reign over the house and laboratory.

Mr. Hyde needs a lair and soon rents a room in the seedier part of London.  Once this base is established he makes a beeline to the dance hall and Gina.  He claims her as his own and takes her back to his room.  After using and abusing her for a time, Mr. Hyde throws her out having taken from her all that he desired, including a ring that holds a dose of poison.  Gina is shattered by her relationship with Hyde and returns to the darkness a much different woman.  Jekyll meanwhile has since become engaged to Millicent but has begun to realize that his darker side is growing more and more powerful.  He is afraid that Millicent may be exposed to his depravity and realizes that he has begun to lose his control over Mr. Hyde.  How long will it be before Dr. Jekyll is powerless to stop Mr. Hyde from committing a terrible crime? 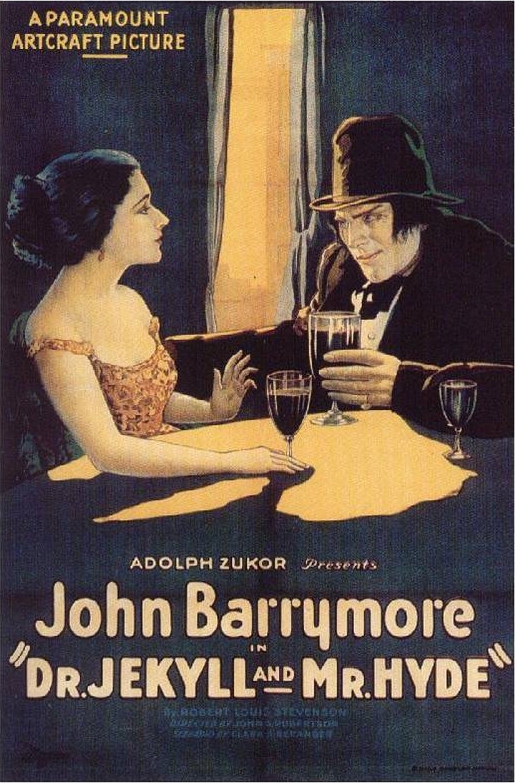 Shown on TCM Silent Sundays as part of their celebration of the macabre, I can definitely say that this film creeped me out at moments.  Several shots of Mr. Hyde leering at the camera as he  moves closer and closer definitely gave me the heebie-jeebies.  There is one moment that I highly recommend that you do not watch with the lights off.  Dr. Jekyll sleeps fitfully as Mr. Hyde in the form of a giant spider climbs onto the bed and disappears inside him.  Super creepy.  The score also gave the film some terrific tension and unease, with the musical accompaniment sometimes discordant and sometimes abruptly stopping and starting again.

John Barrymore really goes to town here.  While I would say that some of the other characters are rather one-dimensional, Sir George is a bit too lecherous and Dr. Lanyon a bit too proper for example, Barrymore goes to town and I think the characters are better for it.  Some have called his performance “broad” and I would agree that there are some really big bite marks in the scenery, I would also argue that this is what makes the whole film work.  DR. JEKYLL AND MR. HYDE is a story of the two extremes of man.  Hyde is the manifestation of pure temptation without any restraint, evil without any soul.  As such, Jekyll must be the model of restraint and control, purity on the edge of piety.  In other words, this is not a story for subtleties.  Yes there are a few laugh worth moments of over the top reactions, the first time he drinks the potion for example, but these just serve to make the movie more fun.  And for all his over the top behavior, Barrymore also has moments of true restraint and remarkable nuance.  In one scene he is transformed back into Jekyll and Barrymore does a wonderful job of portraying relief at being back to normal followed by horror as he remembers what his counterpart has done.  It is also worth noting that the initial transformation of Jekyll into Hyde was done with no makeup or effects.  That was all Barrymore contorting his face and affecting his posture.  If that isn’t impressive then I don’t know what is.

There are many Jekyll and Hyde tales available to the classic film fan but I would say that this one should be on the list of “Must See”.  At a time when so many films are reliant on makeup and special effects to convey characters and plot, it is truly enjoyable to see what happens when a film relies on actor’s skill and story instead.

If you would like an in-depth look at this film, here is another review from Movies Silently.