This post is part of The Great Villain Blogathon hosted by Kristina of Speakeasy, Karen of Shadows and Satin, and Ruth of Silver Screenings.  Be sure to check out the other entries here!

Off the coast of South America a passenger yacht is passing a pleasant evening.  The captain is growing concerned in the navigation room as the channel lights, marking reefs and dangerous rocks, are not corresponding with the known charts.  He goes below to ask for permission to change course which is denied by the wealthy passengers.  The men, including hunter and author Bob Rainsford (Joel McCrea), want to make good time and reach their destinations as soon as possible.  This soon becomes impossible as the vessel runs aground on some rocks and all souls on board are lost.  All save one.

Rainsford surfaces on an island, one that was thought to be uninhabited, and turning back sees the channel lights change position again.  It would appear that someone was intentionally sabotaging nearby ships.  Making his way inland, Rainsford comes across a large mansion which turns out to be the home of Russian Count Zaroff (Leslie Banks).  Zaroff is  sympathetic to Rainsford’s plight as it is apparently a common occurrence.  Currently there are four other shipwreck survivors staying with him, two sailors and a brother and sister.  Eve Trowbridge (Fay Wray) and her brother, and liquor enthusiast, Martin (Robert Armstrong) were rescued along with the two sailors but they haven’t seen their companions in several days.  The men disappeared after being invited to hunt with Count Zaroff, although their host assures them that they are simply busy hunting.

That evening the Count regales Rainsford with stories of his hunting prowess and growing boredom with the lack of challenging prey.  He gloats that he has solved this problem by finding something new to hunt.  He goes on to tell Rainsford that on this island he hunts, “the most dangerous game”.

THE MOST DANGEROUS GAME is based on a short story by Richard Connell and is the only adaptation to use the original characters.  This is not to say that the film doesn’t make a few changes.  For one, the addition of Eve and her brother was a change made for the film. I read the short story when I was in high school and in the original story Rainsford travels with a friend to South America to hunt jaguars and falls overboard after hearing gunshots from the nearby island.  Swimming to the island he is made the guest of Count Zaroff and his mute servant Ivan.  These are the only three people on the island and it definitely adds to the feeling of isolation and desperation that Rainsford goes through as the story progresses.  I will say that the addition of the brother and sister, while it is useful as a plot device in helping Rainsford discover the truth of Zaroff’s dangerous new prey, for me took away from the overall sense of paranoia and doom that the original story had.  And Fay Wray is in full on damsel in distress mode which I will say made me think more than once that maybe, just maybe, Joel McCrea should leave her behind for you know…reasons.

But since this is a villain event let’s talk about Count Zaroff.  This was Leslie Banks’ first important film role and he does quite well with it.  Leslie Banks is notable for having received a facial injury during World War I.  The injury left scarring and paralysis on the left side of his face, a fact that he actually used to his advantage during his acting career.  When playing lighter and more romantic roles he would turn his right side toward the camera and when playing the villain he would turn the left.

The Count Zaroff of the film felt a bit different from the Count Zaroff of the story.  In the short story Zaroff comes across much more, oh what’s the word, insane.  I mean he is scary insane.  The sort of insane that believes itself sane.  The Count Zaroff in the film is nuts to be sure but he seems more interested in inflicting pain and fear than furthering his rhetoric.  There is also a whole storyline involving Eve and the ecstasy of “love” after the hunt, infer at will, which is not part of the original story.  This little wrinkle adds a more predictable layer to Zaroff, making him a bit more like your ordinary villain and less like an unpredictable madman.  For all the differences, Leslie Banks is quite good in this role.  He brings a fun and charisma to Zaroff during the early scenes that make him charming and intriguing, and a dangerous edge to later ones that add to his menace. 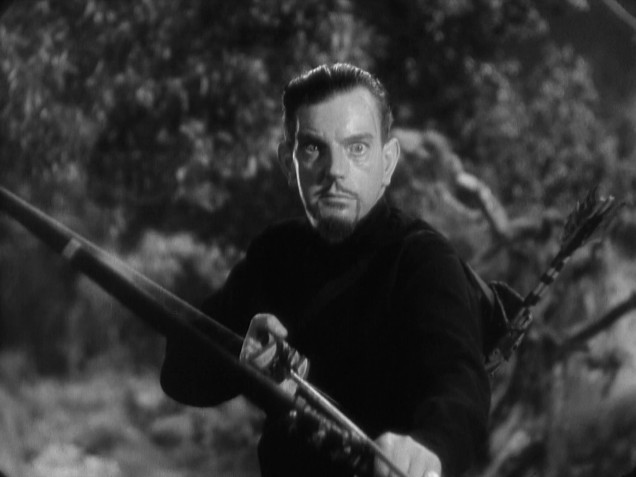 THE MOST DANGEROUS GAME is a very short film, only sixty-three minutes, so the actual hunt only makes up about twenty minutes.  But even in that short time we get a sense of evil from Zaroff that begs the question, who is the most dangerous animal?

8 thoughts on “The Great Villain Blogathon: THE MOST DANGEROUS GAME (1932)”