Classic films for me are sort of “comfort food” for my brain. This isn’t to say that there aren’t challenging and stimulating classic films. There most certainly are. But something about watching a classic film definitely helps to calm and soothe me, even in the most trying of times.

As I’ve said before, I go through phases with classic films. Sometimes they’re all I want to watch. Other times I can’t even get through one of my favorites. It’s the same with books. Sometimes all I want to read is fantasy or nonfiction or classics. Sometimes I don’t touch a favorite genre for months. But books and classic films are part of who I am. So inevitably I come back to them, no matter how long of a break I take.

Obviously, life is not in a calm state at the moment. We all watch the news and see the headlines, the restless scrawl of the 24/7 feed of terrible things happening everywhere. And at night, when my children are asleep and my husband and I can finally watch some “grownup” things on the television, I find that more and more I seek out movies that are more than just things blowing up and people being horrible to each other. Last night I did something I hadn’t done in months. I opened my Watch TCM app and picked a movie.

The Enchanted Cottage was seen as too sentimental by many critics when it first premiered. Released at a time when the world was in a state of being forever changed by terrible things that had happened all over the world, the film tells the story of two people who are pushed out by other people because they are different.

Dorothy McGuire plays Laura Pennington, a homely and lonely woman who has become accustomed to being alone and overlooked. She doesn’t want to be left alone, she’s simply more comfortable with that than being rejected by strangers. She takes a position as a maid in a local cottage, run by Mrs. Minnett (Mildred Natwick). Mrs. Minnet lost her man in the first World War and now tends the place that would have been their honeymoon home. She rents it out to newly married couples and each one comes away changed by the place. At least that’s the rumor. Laura doesn’t believe the stories but she is intrigued when Oliver Bradford (Robert Young) and his fiancee show up to rent the place. 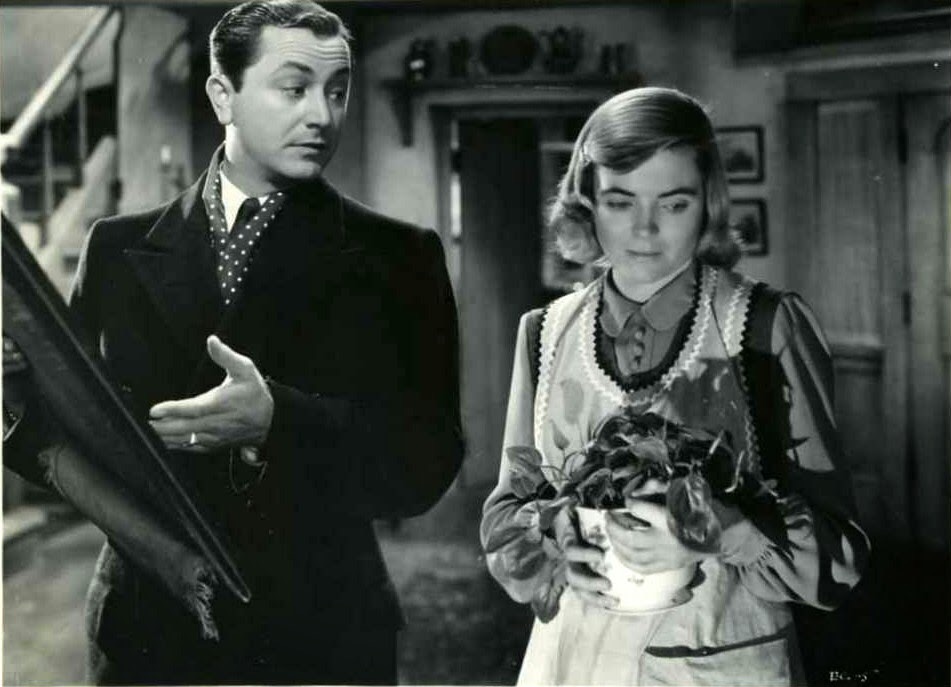 In spite of their desire to stay at the cottage after their wedding, Oliver is bound for war as an air force pilot. Plans are put on hold and Laura moves on with her life. Some time later, Oliver returns. He’s alone this time, his engagement having broken up due to the terrible physical and mental scars he received in the service. As the days pass, he and Laura develop a friendship and a relationship that begins to heal them both. When Oliver proposes, Laura accepts, though each assume it is merely pity on the other’s part. It’s only after they’re married that they experience the magic of the cottage for themselves.

The story of The Enchanted Cottage made me think of a folk tale rather than a fairy tale. A story developed to reflect the darkness of the world and suggest ways to deal with it. While audiences in 1945 would likely have seen their brothers, husbands, friends, and lovers in the character of Oliver, the physical scarring is something that is not foreign to any of us today. Laura is, likewise, still a recognizable character. While being a spinster is not the terrible state that it once was, the aching loneliness of a person on the outside is constantly familiar.

Mrs. Minnet, upon seeing Laura arrive home in tears from being rejected at a local dance, advises her “It’s not for some of us, for you and for me, to try to live like other people. You think you can sometimes, but there’s always the world to remind you. All the things that other people take for granted, you’ve got to make up your mind and your heart, they’re not for you. You’ve got to find something else to take their place; somewhere where you’re safe, where no one can hurt you.”

I think that sometimes we, especially as classic film fans, can identity with this feeling. Feeling so completely other that it seems impossible to reconcile ourselves with the outside world. Knowing that most people, especially younger people, “don’t get it” when it comes to our hobby and passion. But what if instead of giving up the idea of connecting to other people and finding something else to occupy ourselves with, as Mrs. Minnett suggests, we used our passions and our comforting films to help illuminate each other and find the beautiful things within?

Even now in a time when many people are home, alone and isolated due to circumstances wildly beyond their control, there is a temptation to hide away even more. Perhaps that’s why I have turned back to classic film. While I think we can all agree that the state of the world when they were made was not as idyllic as the stories in the movies would have us believe, there is something comforting in going back to a past time. I think maybe it’s because they’re from a world that had faced terrible things and had survived. The stories they tell are the stories of men and women who wanted to believe that the world could be that good.

The magic of The Enchanted Cottage comes not from the actors but the audience. When the changes come over Laura and Oliver only we can see them. The other characters have no idea the alteration that has come over them but we do. We get to see them as they truly are to each other. I think in a way it’s a reminder to each of us. A reminder to love each other and ourselves for what’s inside, to accept one another as fellow souls trying our best to get through the difficult and seemingly insurmountable parts of life. To keep believing that with love even the darkest moment can pass.

None of us know what will happen in a month. Or a week. Or even a day. The sudden immediacy of daily life, the need to be solely present in the here and now, can be difficult for us. We live in a world that says faster is better, do more not less, judge others before they judge you. Current events have forced us to reconsider.

So I come back to classic films. Because in them I find comfort and stillness, acceptance and understanding. And let’s face it…fun. I think we could all use a little of that right now, don’t you?