In the hills of Norfolk, England a storm is coming.  As the rain pours down the local community make their way to Our Lady of Rheims Convent in search of sanctuary against the rising floodwaters.  The nuns in the convent are making things ready under the watchful eye of Sister Mary Bonaventure (Claudette Colbert).  Sister Mary is not too popular with the nurses who work alongside the sisters, thanks mainly to her exacting manner and superior attitude.  But Sister Mary has demons of her own thanks to her guilt over her sister’s suicide.  Her only ally against the nurses is Dr. Edward Jeffreys (Robert Douglas), who is awaiting the arrival of his sickly wife. 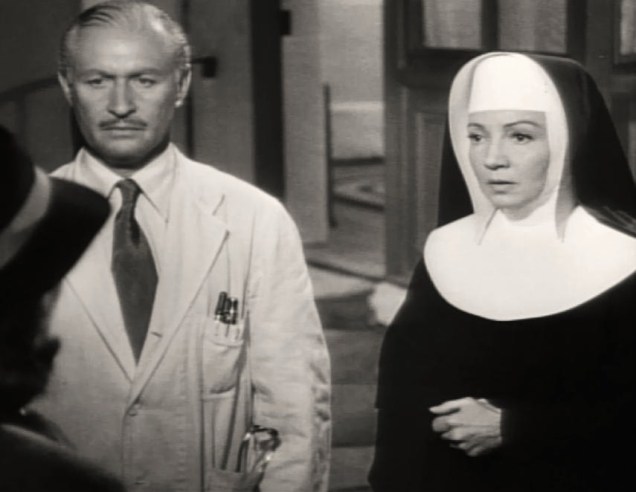 Before too long all the townspeople, and Dr. Jeffreys’ wife, are gathered safely inside and not a moment too soon as the call comes in that the roads are completely flooded.  Everyone settles in for the night but the sisters receive a surprise from the police sergeant.  Convicted murderess Valerie Carns (Ann Blythe) was on her way to her execution when the roads flooded.  Now forced to wait until the weather improves, Valerie and her guards are being sequestered at the convent much to the chagrin of the local populace.  The other nuns accept Valerie as a lost soul, someone to be treated carefully but with compassion, but Sister Mary feels compelled to try to make a connection with Valerie. 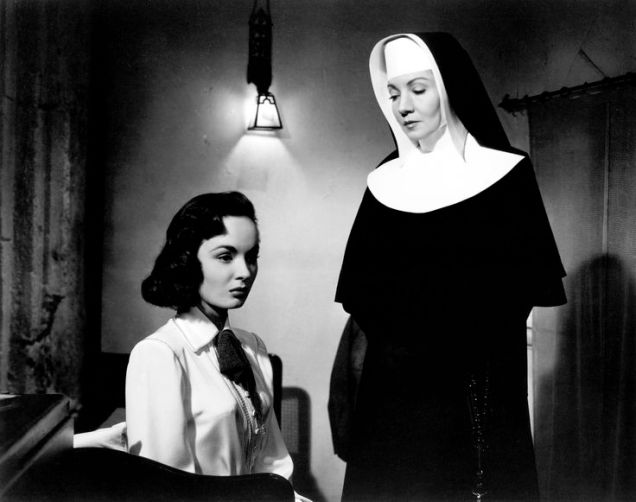 Not surprisingly, Valerie is less than enthusiastic about Sister Mary’s attempts to make nice.  Convicted of murdering her brother, the ailing pianist Jason Carns, Valerie is all too aware of what people think of her and just wants to be left alone.  Sister Mary perseveres, much to pretty much everyone’s annoyance, and Dr. Jeffrey’s is forced to tell her the cold hard facts.  It seems that he knew Valerie and her brother as he cared for Jason before he died.  He says that he heard Valerie wish her brother was dead and the circumstantial evidence that he, and others, gave during the trial helped convict her.  Sister Mary sees the parallels between Valerie’s suffering and her own guilt over her sister and is even more determined to help.  As time passes Valerie begins to warm up to Sister Mary and tells her that the truth is she did not kill her brother but has been falsely accused.  It is now up to Sister Mary to discover what really happened to Jason Carns before the waters recede and Valerie is taken to fulfill her death sentence.

THUNDER ON THE HILL is based on the play Bonaventure by Charlotte Hastings and is definitely a lesser known work by director Douglas Sirk.  Claudette Colbert gets to show some real dramatic range in a role that was certainly not typical for her.  In 1951 Claudette Colbert was still a great actress but the tide was turning and her type of woman, refined, classy, and elegant, was being replaced by a younger, “sexier” generation.  But in THUNDER ON THE HILL she is stripped of her usual glamour and fashion and what we are left with is simply the woman and the actress.  In spite of spending the entire film in a habit, Claudette Colbert still manages to radiate energy and elegance and makes us feel that here is a woman driven by dark secrets to strive for something greater than herself.  There is of course a religious connotation to the story, simply due to its setting, but Douglas Sirk didn’t want that to be a large part of it.  He said, “I wanted this picture to have nothing to do with religion. For me, there is one interesting theme in it: this girl (Ann Blyth) being taken to the gallows, the storm, the delay, and so on. This should have been the only thing the picture was about. There was no story in the Claudette Colbert part. But for various reasons, including the fact that the producer blew most of the budget building that fantastic convent in Hollywood, when we could have gone on location somewhere, they kept pushing it towards religion the whole time.”  While religion might have come into it, the fact that Sirk’s primary intention was to examine the relationship of these two women and a young woman facing her own mortality is part of why I enjoyed this film so much.

This is one of those films that allows women to hold the spotlight.  The women in this story are weak, frightened, cunning, cruel, nobel, naive, funny, and intelligent.  In short, they are people and fully developed ones at that.  They are not simple caricatures of what women were “supposed to be”.  Nor are they purely evil or purely good, but rather a bit of both.  Douglas Sirk allows his female leads to be unpleasant, to be wrong, to be ugly even in an effort to examine their relationship in the face of looming death.

I recently read the fantastic book BURIAL RITES and some moments in this film made me think of that.  Particularly the beginning with the people’s reactions to having a condemned murderess in their midst was very reminiscent.  I wish that a bit more time could have been spent with Valerie learning to trust Sister Mary before she completely opened up to her.  I wanted to see Ann Blyth angry more!  But aside from this small quibble I really enjoyed THUNDER ON THE HILL.  I watched it on National Women’s Day and it seemed a fitting movie to watch on that day.  I highly recommend checking this film out if you have the chance!