When I was recommended THE WISHING RING for my month of silents I wasn’t sure what to expect.  The story sounded fairly simple, boy meets girl, boy and girl fall in love, girl gets ring she thinks grants wishes…wait what?

In a small and sleepy village some good old college boys are having a good old college drinking party.  The neighbors are less than thrilled by this and naturally the local constabulary is called in.  The young lads scatter but leave behind one of their number.  Giles (Chester Barnett) wakes up in a jail cell to the sweet sounds of mocking from his fellow students.  When he is called before the college board he finds that his night of partying has cost him dearly and he is now expelled.  It would be expected that this would go over as well as a lead balloon with his father and that would be correct, except that things are made even worse by the fact that Giles had just sent his father a letter telling him how great things were going at college.  Dad is less than thrilled by Giles’ lackadaisical attitude and throws him out of the house under strict conditions not to return until he can earn half a crown on his own.  This might not seem too terrible until we realize that Giles’ father is the Earl of Bateson (Alec B. Francis) which means that Giles was born with a silver spoon in his mouth, in his hand, and in his pocket, and has probably never had to do anything on his own.

Giles heads to the home of a family friend who is getting ready to leave on a trip.  Luckily for Giles the gardener of the home has just been fired, over a small matter of some missing roses, and he is hired on the spot.  Giles is tasked with caring for the gardens and protecting the roses which have been getting stolen every day.  It isn’t long before Giles spies the rose thief in action and goes out to confront her.  Sally (Vivian Parsons) is the daughter of the local parson who has been stealing roses in an effort to decorate the church’s altar.  Giles softens upon seeing this humble reason and even shares his lunch with Sally.  The two chat and bond while enjoying some bread, jams, and grapes.  Sally however believes Giles to be a common gardener and Giles does not correct her for fear of ruining their new friendship. 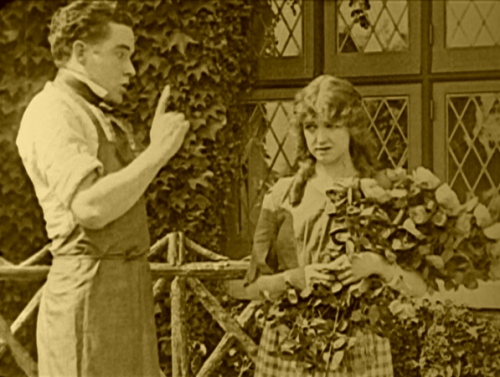 The next day Giles calls at Sally’s humble cottage and brings with him various foods for Sally and her father to enjoy.  For her part, Sally shares with Giles some of her “delicious” dandelion tea which Giles drinks with gusto.  One evening Giles and Sally go walking together and stumble upon a gypsy camp.  While there Sally buys a small ring that is said to be able to grant wishes.  When Giles overhears Sally wishing to kiss her true love he quickly, and secretively, fulfills the wish and gets a brilliant idea.  Using the ring as cover, Giles begins doing wonderful and generous things for Sally such as buying her a new dress and shoes to go to a party at his employer’s house.  It is at this part that Sally and her father figure out Giles’ true identity and Sally becomes determined to repair the relationship between Giles and the Earl.

I have to say that for a film with such a short run time, fifty-four minutes to be exact, I was surprised how much happens!  You might think that this recap spoils most of the story but I would say that I have talked about only 30-40% of what happens.  The story is completely charming and engaging, and the film never feels trite.  It is a very sweet story that is also photographed beautifully.  I loved the opening and closing moments especially but there are so many lovely images to behold.

The characters in THE WISHING RING are some of the most endearing and human that I have seen in a long time.  Giles starts the film as a spoiled rich boy and slowly becomes a generous self-sufficient man.  He also is quite funny and it was really great to have a film where the bratty rich kid wasn’t intolerable before turning insufferable.  The Earl was a great character as well with some really funny moments, especially when it comes to his gout.  But by far my favorite character was Sally.

Sally could have easily become such a one-dimensional character, the sweet girl next door with the heart of gold, and pure as the driven snow.  But how boring would that be?  Instead Sally is a sweet and happy girl with some flaws.  She sings terribly, makes horrible tea, is a bit impulsive and naive, and does not always have a good sense of boundaries.  She feels like a real person rather than just a character.  I also loved that when she finds out who Giles really is her first reaction is not to go off in a huff and give him the cold shoulder for hiding the truth from her, but rather to help Giles reconcile with his father because she loves him and wants him to be happy.  I will lay it out there right now that I absolutely hate when a girl finds out something the boy she likes has been hiding from her and proceeds to storm off and give him the silent treatment.  Thankfully this does not happen in THE WISHING RING.  So much of Sally’s charm and wit is thanks to Vivian Martin, an actress I had never heard of before this film.  It seems that she didn’t do many more silent films which is a shame, but I am so happy that I got to see her in this!

Overall I really enjoyed THE WISHING RING and would recommend it as a great example of a charming and well done romantic comedy.  It is included on a new collection from Flicker Alley and is beautifully restored with a great score to boot.  Going from a lost film, to being discovered by none other than Kevin Brownlow and subsequently restored, THE WISHING RING is a film that deserves a wider audience and greater renown…if only to watch Sally steal Giles’ grapes.

If you would like to read another review of The Wishing Ring allow me to suggestion this highly excellent and well-researched one by Movies Silently!