Out of the stuff of one of the saddest and most arresting human dramas of our times—that is the fate of the children of Europe whose homes were wrecked and whose lives were damaged by the war—Lazar Wechsler, a Swiss film producer, has made a picture which may prudently be said to be as fine, as moving, and as challenging as any the contemporary screen provides. The Search is its American title, and it opened at the Victoria last night. Our earnest wish is that it might be seen by every adult in the United States.

For The Search is not only an absorbing and gratifying emotional drama of the highest sort, being a vivid and convincing representation of how one of the “lost children” of Europe is found, but it gives a graphic, overwhelming comprehension of the frightful cruelty to innocent children that has been done abroad. Within the framework of a basic human story—the tireless search of a displaced Czech mother for her little boy and the parallel efforts of others to help the nameless youngster and give him security after the war—it clearly lays out for us a problem facing western civilization today: what’s to be done with this vast backwash of shattered children who will be grown-ups tomorrow? 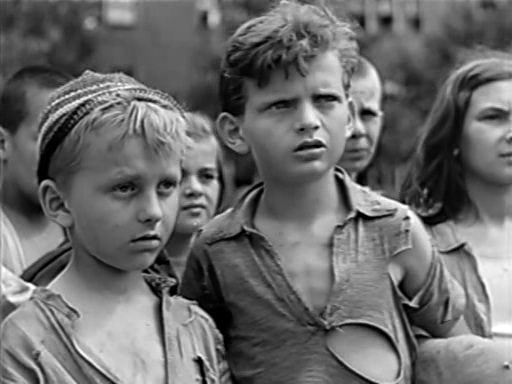 THE SEARCH opens with trains carrying children.  These are orphans, children separated from their parents and families, children who have seen unspeakable things in concentration camps, who have lived on the streets, who have hidden in fear from the Nazis.  This time the trains are taking them to an American camp, specifically set up for the processing and care of these lost souls.  In charge of this camp is Mrs. Murray (Aline MacMahon), a older matronly woman with the hardened efficiency of the military officer she is, and the kindly concern of a mother that she might be.  The children are frightened and unsure what is about to happen with them.  None speak English and for many the last train they rode on took them to a place of nightmares.  Through gestures and some French, Russian, Polish, German, Czech, Hungarian, and Hebrew, most of the children are able to give their names and tell their terrible tales.  One girl was forced to clear away the clothes of the people who had been gassed, finding among them the blouse of her mother.  Another young boy saw his parents killed before his very eyes.  The adults are shocked and saddened by what they hear, but they do their best to try and make the children understand that they are safe at last.

Among the children there is one little boy who remains silent refusing to speak except for “Ich weiß nicht”, I don’t know.  The only one who knows him is a little French boy who has been hiding with him, but even his French companion does not know this boy’s true name or where he comes from.  The only clue is a number tattooed on his arm and a woolen cap on his head, obviously made with love.  The mute little boy is named Karel Malik (Ivan Jandi) from Czechoslovakia and he was the son of a mother and a father, and little brother to a sister.  What Karel cannot remember is what happened to him, what happened to make him forget and be silent.  He and his mother were separated from his father and sister and sent to a concentration camp.  While in the camp Mother and son were separated and it was this trauma that sent Karl into his mute state.

The children are to be moved to a larger facility, one equipped to handle them.  They are loaded into ambulances but many children panic because ambulances were used to transport those on their way to the gas chamber.  After some coaxing the children board the vehicles and start on their way.  But during the journey some children smell exhaust fumes and mistakenly believe they are on their way to be gassed.  Several children break out of the vans and begin running away, including Karel and his companion.  While most of the children are rounded up and brought back, Karel and his friend attempt to ford a river to get away.  In the crossing Karel’s friend drowns and he himself is assumed drowned when only his woolen cap can be found.

Karel wanders into the ruins of a town, tired, hungry, and suffering from a cut foot.  He comes across an American GI eating a sandwich in his jeep.  Ralph “Steve”  Stevenson (Montgomery Clift) shares his sandwich with Karel and decides that he cannot leave the young boy on his own.  It takes some strong arms and determination, but Steve manages to get Karel back to his house.  Once he shows Karel that he and his friend, Jerry Fisher (Wendell Corey), can be trusted things calm down.  Steve even begins teaching Karel, whom he nicknames “Jim” as he has no idea of Karel’s true identity, to speak English and is trying to use government channels to find out any background information on Karel using the number tattooed on his arm.  When the answer comes back that there is no child registered with that number and that no one has come looking for a child matching Karel’s description, the official suggestion is to take Karel to a government camp especially as Steve is awaiting his transfer orders back to the United States.  Steve isn’t too happy with this course of action however, as he and “Jim” have started to bond, and begins trying to find a way to bring the boy back to America with him.  But what Karel and Steve don’t know is that Karel’s mother, Hanna (Jarmila Novotna), has survived the concentration camp and is now searching for her lost son.

I have to be honest, I never was completely blown away from Montgomery Clift.  I often found his characters rather similar in their portrayal, tortured and angst ridden, and I attribute that to his real life struggles with anxiety and later drug and alcohol addiction.  I know that his friendship with Elizabeth Taylor, though it was his greatest and most enduring, took a toll on him emotionally which possibly contributed to the angst we see on screen.  But THE SEARCH introduced me to a completely new Montgomery Clift.  This is his first starring role and there is a genuineness and eagerness to him.  You can almost feel his energy, his earnestness, and there is a true star quality on display.  We are seeing Montgomery Clift at the beginning, before life took it’s toll, and it is dazzling.

Rumor has it that Ivan Jandi spoke no English and learned all his lines phonetically.  If this is true it is all the more impressive, as even with no command of the English language Ivan Jandi turns in a performance that is so affecting that it will stay with you long after the film is over.  The relationship between his character and Montgomery Clift’s Steve feels honest and true, with no hint of American propaganda or overly sweet sentimentalism.  This relationship is the heart and soul of this film, and it works beautifully.  Steve moves through the initial shock of realizing that this little boy has been through the horrors of a concentration camp, and all the terrible things that entails, and comes to a feeling of responsibility and love for his young charge.  This is not a case of a swell American taking in a stray refugee and showing him how terrific America is, rather this is simply a man who has seen terrible things that have shaken him to the core who finds a young boy who has suffered those terrible things and wants to do the best thing for him. 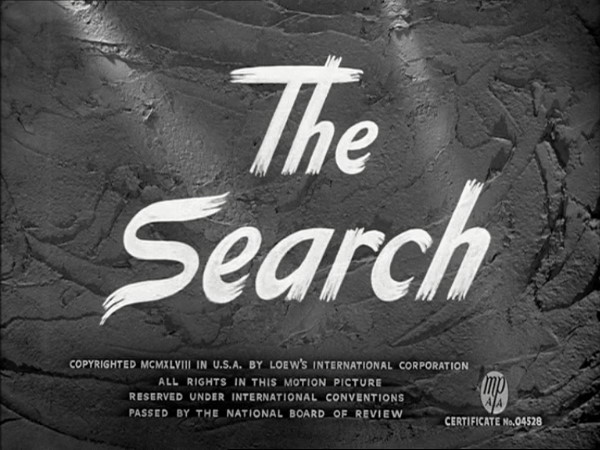 THE SEARCH is a film that I feel is important.  Usually noted for being shot among the actual ruins of Ingolstadt, Nuremberg, and Würzburg, there is so much more to this film.  THE SEARCH is a beautiful film that pulls no punches when it comes to telling the horrors of war and the terrible things done to the children at the hands of the Nazis.  It pulls no punches at the emotional toll the war has taken on the soldiers, the civilians, and the children.  It is honest, heartbreaking, and amazingly well done.  I truly hope that you will take the time to seek out this film and see it for yourselves.

The Search, in our estimation, is a major revelation in our times.

If you want to hear more about Montgomery Clift you can find a terrific podcast by Karina Longworth called You Must Remember This here.  Also, here is the link to the original movie review quoted in this post.  Finally, if you would like to own a copy of THE SEARCH you can buy it here!