This post is part of the What A Character! Blogathon hosted by Once Upon A Screen, Outspoken & Freckled, and Paula’s Cinema Club.  Make sure to find all the other entries here! 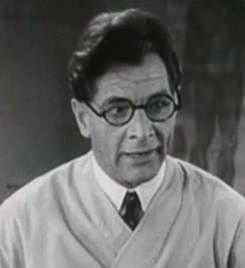 For a man with over 160 credits to his name, appearing both in films and television between 1915 and 1964, precious little information is available about Robert Barrat’s life.

Robert Harriot Barrat was born on July 10, 1889 in New York City.  He started his career in show business with a theatrical stock company in Springfield, Massachusetts.  He did some work in silent films in 1915, but after just three films he returned to the theater and eventually made it to Broadway.  When he eventually returned to Hollywood, his distinctive face and powerful physique lead to a career as a character actor beginning in the 1930s.  His friend James Cagney said that Barrat had “a solid forearm the size of the average man’s thigh.”

Barrat used his physicality and his vocal ability to play a variety of characters including business owners, various officials, sailors, lawyers, detectives, as well as some less than savory fellows.  He appeared as Chingachgoook in THE LAST OF THE MOHICANS, Lord Morton in MARY OF SCOTLAND, Wolverstone in CAPTAIN BLOOD, and Major Ferdinand Walsin Esterhazy in THE LIFE OF EMILE ZOLA…among many, many, MANY others.  Prior to 1936, Robert Barrat was appearing in approximately twenty films a year.  He slowed down after 1940 and only made about ten films a year.  By the 1950s he was working television playhouses off and on until his death.

Robert Barrat died on January 7, 1970 at the age of eighty years old from heart disease.  He was buried in Green Hill Cemetery in Martinsburg, West Virginia.  Robert Barrat was survived by his second wife, Mary Dean, whom he had married in 1966.  His first wife, Ethel M. Mueller, had died the year before.

And that’s it.  For a man who appeared in 150 films, seven of which were with James Cagney, that is all the information that is readily available.  So, if you will permit me, I’ll share my story of how I came to know Robert Barrat’s work.

It started with a film called HEROES FOR SALE.  In it Barrat plays Max, a communist inventor living in a boarding house alongside Loretta Young and Richard Barthlemess.  From the first scene, Robert Barrat is electric.  With his quick speech and tsking tongue, the character of Max immediately became one of my favorites.  The character could have been so simple and one-dimensional, a radical “red” scientist spouting the ideals of communism, but in Barrat’s hands he became charming and intriguing.  Max becomes one of the more relatable characters in the film, speaking the words that many of the audience members suffering through the depression most likely thought but could not voice aloud.  From this moment on, I went on the lookout for Robert Barrat.

I found him next in the pre-code FROM HEADQUARTERS.  This time he plays a man with a dark side as sharp as a knife’s edge.  A well made procedural, FROM HEADQUARTERS details the solving of a murder even as Robert Barrat’s character attempts to tie up all the lose ends.  There was such a cold menace to Barrat in this film that you know, absolutely KNOW, that he will kill whoever he needs to in order to accomplish his task.  While some of the other characters in the film feel a bit forced, George Brent’s main squeeze is a bit one-dimensional, Robert Barrat feels authentic and all the more dangerous for it.

He even shows up in WHILE THE PATIENT SLEPT, which is a terrific and fun murder mystery from Warner Archive.  I can’t tell you too much about his role without giving away the plot but suffice to say, he gives another completely different performance.  That is the wonderful thing about Robert Barrat.  Once you are looking for him, you will find him everywhere doing just about everything.  As with any great character actor, Robert Barrat has a great range and is able to portray everything from bumbling old men to cold-blooded murders.  Take a look at his filmography…I’m sure you will be able to find at least one film that you have seen which he has worked on.

In a way I’m sad that there is such limited information out there about Robert Barrat.  Sad that this man, who had such an impact on films as a character actor, is almost forgotten today and I am ill-equipped to give him the tribute he deserves.  But I am glad that I have this chance through this blogathon to share what little information I can find with other classic film lovers who will now be able to discover this fabulous actor.

13 thoughts on “What A Character! Blogathon: ROBERT BARRAT”