Several months ago I read a great post (well, one of many great posts) by Kristina over at Speakeasy about a gritty gangster film she had just seen called HIGHWAY 301.  Spurred on by her recommendation I picked up at copy from Warner Archive but haven’t gotten around to watching it until now. 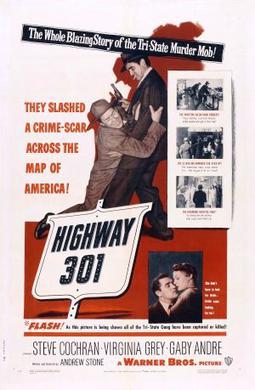 The film starts with the real-life governors of Virginia, Maryland, and North Carolina extolling the virtues of staying on the right side of the law and reminding audiences that the film they are about to see is based on true events.  The action then quickly moves to a bank robbery being perpetrated by Tri-State Gang.  The gang is made up of George Legenza (Steve Cochran), William B. Phillips (Robert Webber), Robert Mais (Wally Cassell), Herbie Brooks (Richard Egan) and Noyes (Edward Norris).  The men make off with the money but they are spotted by a farmer as they switch cars, allowing police to get a partial license plate from the getaway car.  Up to this point the police have been unable to identify any member of the Tri-State gang but the men are no strangers to the law.  Each has had run ins with the police but have received only light sentences for punishment.

Flush with the success of a bank heist done well, the men head back to their wives and girlfriends.  Phillips has recently married a French Canadian by the name of Lee Fontaine (Gaby Andre) who is blissfully unaware of what her husband does for a living.  Legenza’s girlfriend, Madeline (Aline Towne), is more than happy to tell her especially since she has become so disillusioned with the crooked life.  Madeline is miserable and begs Legenza to let her leave but his puts a stop to those thoughts with the back of his hand.  The men go off to talk and Madeline starts to strongly drop hints to Lee about where her new husband’s money comes from, despite the efforts of Mais’ girlfriend Mary Simms (Virginia Grey) to stop her.  Madeline does shut up when Legenza pops up behind her, having heard the end of her little tirade.  Madeline runs off to the ladies room with Mary close behind while Legenza grills Lee on just what was being said.  Fearing for her life, Madeline gives Lee the slip and hurries back to the apartment she shares with Legenza.  Her soon to be ex-boyfriend follows closely behind.

The next day Lee is listening to the radio report on Madeline’s death.  She is terribly upset and blames herself and Phillips for Madeline’s death.  She begs her husband to escape this life with her, having now fully realized just what she has let herself in for.  Phillips tries to calm his wife and tells her that so long as he is around nothing will happen to her.  He promises her that they will leave behind the life of crime after one last job.  This will be the big one, the job that will set them up for life.  After that Phillips promises that he and Lee will return to Canada to start their life together.

Legenza has been tipped off to the route of a transport van carrying two million dollars.  The next day the gang sets out and robs the van with Legenza killing a guard in the process.  As they make their getaway they open the bags to find that the money has all been cut and is now worthless.  The police set up road blocks but Legenza uses his tipster to avoid every barrier and the gang makes their escape in the back of an egg truck.  Upon the men’s return Lee is quite upset at what has happened and at the senseless murder of the guard.  Legenza begins to suspect that Lee might be a threat to the gan, even if her husband is currently preventing anything from happening to her.  Little does the Tri-State gang suspect but things are about to get much worse for them as the police have gained another partial license plate number and are now in the process of putting names and faces to the members of the Tri-State gang.

If you ever wanted to watch a film and say, “Wow they did that?” then let me suggest this film to you.  This is a taught and brutal gangster story with tension and suspense to spare.  There are so many great sequences that I don’t wish to describe here because it would diminish their impact. Special note goes to the sequence in the apartment building when Legenza pursues Madeline which uses the ding of an elevator to ratchet up more tension than fifty machine guns.  The many escapes and police pursuits, as well as the scenes of Legenza stalking his prey are also truly spectacular.  The action is fast and brutal and doesn’t let up for a second. Can we take a moment and just comment on Steve Cochran?  He always seems to play a nasty piece of work but Lengenza is just about the nastiest piece of work I have seen in a while.  First of all, he shoots EVERYONE…and I do mean everyone.  Second, he has an almost pathological disdain for women.  It starts with Madeline and moves on to Lee, as well as other female bystanders, with Legenza ripping through women like tissue paper.  His slaps fly as fast as his fists, and he shoots with a cold precision that proves he won’t let anything or any one prevent him from getting what he wants.  He seems to have a loyalty to the other members of his gang but that is about it.  Steve Cochran plays all this with a tightness and a coldness that makes it truly frightening.  Legenza never loses his temper completely, never flips out or acts in a way that seems like anything other than cold and methodical.  Maybe that is what makes Legenza even more frightening, the idea that there is even more rage, an even darker side that is still lurking below just waiting to come out and play.